Does your family argue about petty things like control of the TV remote, hogging the bathroom and squeezing rubbish into a full bin rather than emptying it? If so, you’re not alone! Whether you’re part of a small or large household, little things like these can often niggle at us and lead to family friction.

But what exactly are we all bickering about, and how often do these little rows occur? To find out what some of the most common UK household arguments are (as well as who instigates them), here at Cushelle we’ve carried out a survey of 2,000 UK adults living with their partner/spouse or family, and asked one family to lift the lid on the main reasons for their household tiffs.

Sneak a peek below at what life is like in the Wallin household, and read on to find out the results of our family arguments survey.

The average household has three tiffs a day 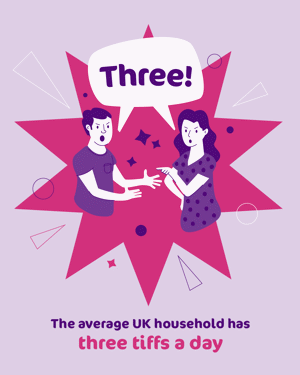 Whether it’s with parents, children, siblings, or our other halves, we can all agree we’ve bickered at some point with our loved ones. In fact, according to the Cushelle family arguments study, 1 in 3 households have one or two rows every single day. What’s more, despite daily bickering, a huge 84% of us agree that most of our family tiffs are trivial.

Tensions ran high during UK lockdowns, with 41% of people agreeing that restrictions led to more and more arguments about the little things, and just under two fifths saying they bickered about topics they wouldn’t have done previously.

So, just how many more family arguments during lockdown were there? Well, just over a third (34%) say they had one to two more arguments than usual each day over the last 12 months*, while 28% say they had between five and 10 more rows each day on average.

With each one lasting just under four and a half minutes on average, 10 more arguments is the equivalent of approximately half a football match spent bickering every day! If you do find yourself bickering more than usual with your household, take a look at our guide on resolving conflict at home.

Partners get the blame for hogging the bathroom the most 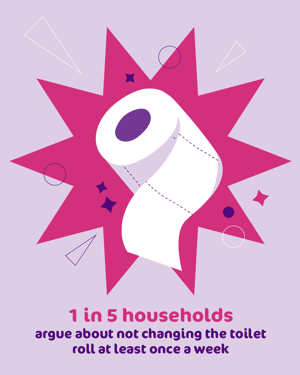 Picture this: you’ve missed your alarm and desperately need to freshen up, but there’s someone in the loo. Sound familiar? Bathroom hogs can cause many a household argument, but the question is… who tends to be the culprit?

Almost a quarter of us blame bathroom hogging on our partner or spouse, followed by 12% who claim it’s the eldest child that spends the longest in there.

Interestingly, nearly a fifth of Londoners say bathroom hogging is a common source of household arguments, compared to only 3% of residents in the East Midlands.

Outside of England, just over a third of people in Wales blame their other halves for spending too long in the loo – more than double the amount (16%) of Northern Irish residents!

There are few things more irritating than sitting down on the toilet, only to find that there’s no loo roll within reach. In fact, 34% of households argue once or twice a week about someone leaving the empty tube lying around, while 14% bicker between three and five times about this over the course of seven days – that’s at least one argument every other day about toilet roll! 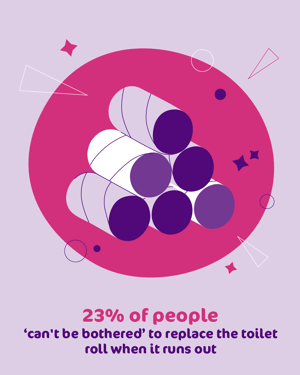 Given that just over half of us (56%) admit to using up the last of the roll and not replacing it, it’s not surprising this is the cause of a fair few household tiffs. The question is though, why do we leave the empty toilet roll out?

Replacing the roll is a basic toilet hygiene rule, but 23% of people admit they simply can’t be bothered to do it, while 43% blame forgetfulness and 1 in 5 have the cheek to admit they know someone else will do it for them. In fact, nearly a quarter of men will wait for someone else to change it, compared to just 17% of women.

Even though replacing the loo roll takes seconds, rushing seems to be a popular excuse for not changing it, with over a third of women claiming they just don’t have the time. People aged 25-34 are the bracket most likely to use this as their excuse, followed by the 18-24 age group.

For this particular household tiff, we’ve come up with a solution. With twice as many sheets as our standard rolls, our cushiony-soft Double Roll lasts even longer – so you won’t have to change the roll as often (in turn minimising any toilet-related family feuds!).

And if you do spy someone’s left the empty core lying around, don’t be so quick to throw it away; instead, take a look at our guide to creative toilet roll crafts and fashion yourself some flying fish or a mini city.

What role do you play in a family argument?

Take our quiz to find out!

The top 20 most common family arguments according to our survey

Thank you for registering for the newsletter. You will now receive an email with a confirmation for your subscription.