Cushelle’s top tips on how to resolve an argument

In our recent survey into the UK’s most common household tiffs, we discovered that families will have an average of three arguments every day, with 41% believing lockdown (and enforced time indoors) added to the number of rows they had.

Unbelievably, 34% of households argue once or twice a week about someone leaving the empty toilet roll tube lying around – with a huge 14% bickering between three and five times about this over the course of seven days.

With so many of us having household tiffs about hogging the bathroom, leaving the dishes to soak or failing to flush the loo, it’s important to arm yourself with some tips for dealing with any household conflict.

Read on for our top tips on how to resolve an argument at home.

If something has bothered or upset you, avoid lashing out straight away. Matters that rile us up in the heat of the moment can seem trivial an hour or so after. 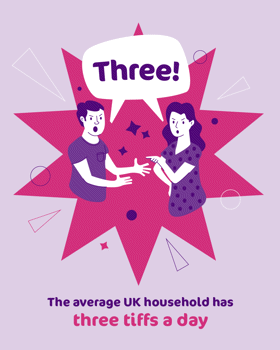 In a similar vein to sleeping on it before making a big decision, giving yourself time to cool off before confronting somebody about something they’ve done will help you see things much more clearly, and possibly avoid a household tiff altogether.

If the argument has already happened, taking some space can still be useful to gain perspective on things. You can then revisit the conversation once you’ve had time to simmer down, which will likely help to resolve the conflict much more quickly.

Keeping shtum and letting feelings fester can end up making matters worse. One of the best tips for how to resolve conflict is having an honest, frank and calm chat to explain how you feel and air any further issues.
There’s a tendency to want to avoid the person you’ve bickered with, but silence will only end up souring the atmosphere and lowering everybody’s mood – possibly leading to an even bigger blowout further down the line. Confronting it will help to settle an argument more quickly.

Understanding your family’s bugbears will help to reduce the number of household tiffs you have. If you know Dad hates lights being left on or your flatmate gets a little peeved when the empty toilet roll core is left sitting on the side of the bath, you can be a little more mindful of your actions.
According to our survey, these were the five most common family arguments: 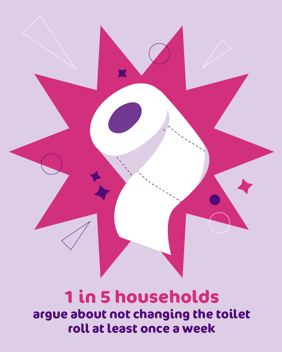 If you’re not guilty of any of these, your household is probably quite a peaceful place!

If you’re deep in the midst of a tiff with a family member or partner, remember that each party’s point and opinion is valid. Often the key for how to resolve an argument lies in making compromises and understanding eachother’s point of view. Make your point clear but listen to the other person’s thoughts as well and come to an agreement together – it may not be the exact outcome you were hoping for, but it’ll help diffuse the situation and create a more pleasant atmosphere within your household. 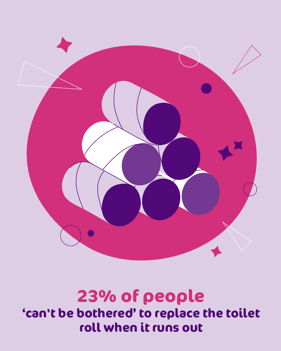 If you’re a household that argues about toilet roll cores being scattered around the bathroom floor instead of placed in the bin, Double Roll just might be your saviour. With twice as many sheets as our standard roll, Cushelle Double Roll lasts even longer so you won't have to change the roll as often – leading to fewer disagreements! (Plus, if you leave a review for Double Roll, you could be in with a chance of winning a £100 shopping voucher!)

Another option is to stockpile these empty cores and repurpose them for your children’s arts and crafts activities. From hamster toys to puppets for kids , we’ve got plenty of ideas for what you can make with them.

Interested in hearing more about our study into family arguments? From bathroom hogs to empty toilet rolls, us Brits argue about some very trivial matters! Have a look at our findings now and take our quiz to find out if you’re the peacekeeper or chief stirrer in your household.

Did you find this article helpful?Thanks for your feedback!
or
Share

Baby development milestones: What to expect

How to travel with kids: the essential holiday checklist for families

School supplies list: what you need for the start of term

Labour checklist: What to pack in a baby hospital bag

Why do babies cry? 8 reasons why your baby might be bawling

Thank you for registering for the newsletter. You will now receive an email with a confirmation for your subscription.